With the announcement of the group stage lineup, World Cup betting fans are scouring the web looking for the latest tips, analysis, and expert opinion on this year’s global tournament. Betting on the World Cup is a special occasion.  It thrusts global rivalries into the spotlight and allows online sportsbook to brag about their ability to predict sporting outcomes like never before. So, with that in mind, let’s take a look at some World Cup betting tips that will help online sportsbook bettors get the most amount of bragging rights out of this year’s tourney.

Getting a good idea of which countries are pegged as 2018 World Cup futures favorites is integral to making the most out of this year’s tournament. Backing a favorite is an alright option at this stage of the tournament, but knowing which underdog is facing steep odds can help players make some daring soccer bets in the later stages.

Despite the fact that the 2018 World Cup will be held in Russia, online sportsbooks aren’t giving the host country much of a shot. All in all, it’s understandable considering that the Russian national team doesn’t carry too much prowess on the global stage. That said Germany, Brazil and France have all been pegged as favorites to win it all in 2018. 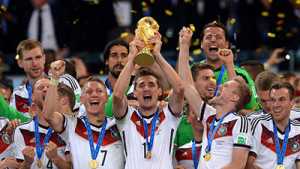 It’s no surprise to see Germany being pegged as a soccer bet favorite ahead of the 2018 tournament.  Additionally, the Germans delivered a flawless qualifying campaign that turned many online sportsbook favorite heads.  They’re pegged as one of this year’s favorites to retain their title. Also included in that favoritism is the fact that the Germans have been drawn in Group F. Since Group F consists of Sweden, Mexico and the Korea Republic, some bettors feel that the Germans have an easy road to the qualifying rounds. Picking Germany to win the tournament this early seems like a decent option, but there are bigger payouts in store. After all, there are innumerable World Cup betting opportunities.

Speaking of easy roads, there are some soccer bettors who feel that Brazil has the easiest road to the qualifying round. Specifically, the winningest country in tournament history has been paired with Costa Rica, Switzerland and Serbia in Group E. However, according to FIFA’s own rankings, Group E is the toughest out of the lot. The reason being, the group has amassed more points as a unit than any other. That said, most bettors will agree that Brazil should have no problem advancing past this group. Thus, picking Brazil alongside some other easy predictions could pave the way to some nice 4 team parlay odds.

While maybe not as big of a draw as the other two aforementioned countries, France has the talent and depth to go deep in this year’s World Cup. Additionally, France has plenty of tournament experience considering that they won the trophy back in 1998 and were runner-ups for 2006’s rendition. France has been drawn in Group C, where they will face Peru, Denmark, as well as Australia.

Usually, there is a ‘Group of Death’ that features two soccer betting titans paired against some underdogs. This is generally what online sportsbook players would like to see. Unfortunately there is no definite Group of Death in the 2018 World Cup. Nevertheless, some might say that Group B, which features both Portugal and Spain, might be the closest group to fit the bill.

In addition to the Group of Death, there are plenty of people keeping an eye on Spain. The Spaniards are out looking to regain the championship.  They won back in 2010 and they definitely have the talent to get the job done. From David De Gea as keeper, to Andres Iniesta at midfield, and even Alvaro Morata at the front; Spain has the talent and experience to outclass most.

Argentina is always thought of as a contender. Notwithstanding that high praise, the Argentinians always seem to fail to live up to expectations. But considering that they have arguably the best ball handler in history in Lionel Messi, World Cup betting players can never really rule them out.