NHL hockey betting players will be treated to a littler interstate rivalry in this evening’s New York Rangers vs. New York Islanders matchup. Neither the Rangers nor the Islanders have been having a successful season, making this matchup all that much harder to predict. Nevertheless, there’s no doubt teaser sports betting players will want to tune in tonight to see who wins state bragging rights. Let’s take a look at what kind of odds both teams are facing in this Thursday night matchup.

The New York Rangers slide into this evening’s pairing sporting a 27-25-5 record that ranks them as the absolute worst team in the Metropolitan Division. Heading into this year’s season, the Rangers were proudly sitting on a 6-year postseason appearance streak. However, it looks like that streak will be coming to a screeching halt at the end of this year’s season. After all, the Rangers’ 59 points on the season puts them a whopping 12 behind the Washington Capitals. Notwithstanding the horrendous season they’re having, the NHL hockey betting odds are siding with the Rangers this evening. This is a bit shocking, but then again their facing the Islanders. How well does New York match up against New York?

All in all, it’s hard to determine who has the upper hand this evening. There’s no doubt that the Islanders have the better offense, since they’re 4th in the NHL in scoring. However, with the 31st worst defense in the league, does having a good offense even matter? Similarly, New York’s 8th rated power play percentage is heavily mitigated by the fact that they’re 30th in penalty kill percentage. On the other hand, the Rangers aren’t brilliant in any one category. But they’re unquestionably the better-rounded team. 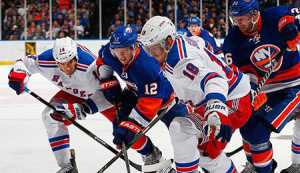 The Islanders enter this Metropolitan matchup flashing a 27-25-6 record that pegs them as the second worst team in the division. Unlike the Rangers, the islanders are coming off a season in which they failed to make the playoffs. However, last year’s season wasn’t as pitiful as the one New York is having this season. Testament to this is the fact that the Islanders are 4 losses shy of matching last year’s deficit total. Likewise, New York is 1-4 in their last 5 matchups. All things considered, this is likely the reason the odds are siding against the Islanders. But this evening’s contest will mark the 3rd time these two clubs have faced each other this season, with the Islanders getting the better of the Rangers in the 1st two. With that in mind, should bettors take the underdog in this New York Rangers vs. New York Islanders matchup?

Considering that the Islanders are on a bit of a losing streak, there’s no question most bettors will shy away from taking them straight up. However, the Rangers aren’t a hard team to beat, considering they’re record. On top of that, the Islanders have already triumphed over their interstate rival twice this season. It’s safe to assume they’ll pull off the 3rd victory this evening.