Players betting NCAA basketball this Tuesday evening have some great matchups to choose from. From No. 18 West Virginia taking on No. 15 Virginia, to an enticing matchup between No. 12 Gonzaga and No. 4 Villanova, there are plenty of options to line up some lucrative 2 team teaser payouts. Considering the matchup between Villanova and Gonzaga will get the national spotlight, let’s take a look at what kind of action NCAA bookmakers are putting together for this year’s Jimmy V Classic.

The Wildcats pounce into this Jimmy V Classic pairing sporting an unblemished 8-0 record that has helped Villanova maintain their Top-5 ranking. So far this season, Nova has been relatively untested as they have yet to face a nationally ranked opponent. It follows that Gonzaga is the Wildcats’ biggest test to date and there’s no question that this will be an epic matchup. Additionally, the Wildcats have beaten their last 2 opponents by a combined 70 points so it’s safe to say that they come into this matchup will pistons firing. It looks like top sportsbooks have taken the national rankings into consideration as they’re pegging the Wildcats as a favorite over the Bulldogs. 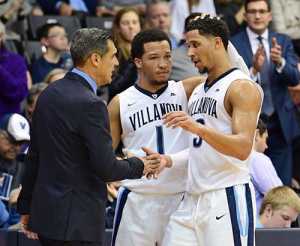 To help prove NCAA bookmakers right this evening, the Wildcats will turn to none other than Mikal Bridges. Bridges is putting up 17.9 points, 6.3 rebounds, and 1.9 assists each game. Jalen Brunson is tied with Bridges for the lead in points per game as Brunson is averaging 17.9 points per outing as well as 3.1 rebounds and 4.5 assists. Donte DiVincenzo is also a leading contributor for Villanova as the youngster drains 11.4 points, 4.4 rebounds and 2.8 assists.

The Bulldogs enter this year’s Jimmy V Classic with a 7-1 record that has given way to a No. 12 national ranking. Gonzaga’s lone loss of the season came against No. 7 Florida, which isn’t a bad team to lose to at all. Since that loss, the Bulldogs have won three consecutive matchups decisively. The last time Gonzaga stepped on the court it was to face the No. 25 Creighton Blue Jays in a lopsided 91-74 winning performance. Despite the fact that the Bulldogs have been put to the test several times this season, there’s no question that the Wildcats are their biggest challenge yet.

Sportsbook players betting NCAA basketball this evening should keep an eye out for Jonathan Williams. Williams is the Bulldogs’ leading points-scorer as he’s averaging 15.9 points, 6.9 rebounds, and 1.8 assists. Josh Perkins is second in points for the Bulldogs as he’s putting up 14.3 points, 3.8 rebounds, and 4.5 assists per outing. Killian Tile plays a major part in Gonzaga’s offense as well. Tile is responsible for 12.4 points, 6.9 rebounds, and 1.8 assists each game.