The basketball betting online season continues into the New Year, giving players plenty of opportunities to capitalize on. This evening, teaser sports betting fanatics will have the opportunity to wager on 12 different NBA matchups. One of the more interesting pairings of the evening is the Oklahoma City Thunder vs. Los Angeles Lakers late-night matchup. Let’s take a look at what kind of action NBA bookmakers are putting together for this Western Conference pairing.

INJURY UPDATE: Lonzo Ball, who suffered a left shoulder sprain 12/23, and Brook Lopez, who suffered a sprained right ankle 12/18, have both been cleared to return to practice and their status is considered day-to-day at this time.

Both listed as questionable vs. OKC. pic.twitter.com/fDB8t9e0Zp

The Thunder enters this evening’s pairings with a 20-17 record that ranks Oklahoma City 2nd in the Northwest Division. Additionally, Oklahoma City find themselves ranked 5th overall in the Western Conference. Most basketball betting online players will recall the transitions the Thunder made this past offseason, bringing in Paul George to help out on the defensive end. After all, last year’s season for Oklahoma City consisted of Russell Westbrook leading the charge on his way to his historic season. So OKC thought they could bolster the defense by bringing in a proven veteran like George. Furthermore, Oklahoma City brought in Carmelo Anthony to help add another weapon on offense. In essence, the Thunder added a great defender, with little offense, in George and a great weapon in Melo – who happens to not like to play defense.

At first the move was questioned. Then the results were questioned: the Thunder played extremely poor through the first two months of the season. However, given by their record, it’s clear that Westbrook & Co. have worked out the kinks. Versus the Lakers, Oklahoma City should have little problem snapping their current 2-game losing streak against a much less experienced team.

The Lakers bounce into this Wednesday night matchup flashing a disappointing 11-25 record. Once hailed to be playoff bound by Lavar Ball, it’s clear that the Lakers will be missing that mark. In fact, Los Angeles is currently the worst team in the Western Conference, which promptly thrusts Lonzo Ball under the spotlight. Ball was hyped up as the savior of this franchise, the man who would come in and elevate everyone’s play to the point that there was no way this team could miss the postseason. Granted, Lonzo has made some improvements in his game and he was never the one to make these promises. But one has to wonder why a caring father would create these extraneous situations for his son to contend with. 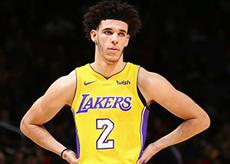 All in all the Lakers enter this night’s contest riding a 7-game losing streak. Considering that Lonzo was absent for 5 of those games, maybe he’s starting to become an integral part of this team. Kyle Kuzma, the Lakers’ other rookie, will be leading the charge this evening. Kuzma is averaging 17.5 points, 6.5 rebounds, and 1.7 assists per matchup. The NBA odds sportsbook haven’t made their mind up about this matchup yet but it’s safe to assume they’ll be siding against Lonzo in this Oklahoma City Thunder vs. Los Angeles Lakers matchup.