After finishing with a .500 record last online NBA betting season, the Miami Heat have been able to deliver a complete turnaround and are currently competing for a top spot in the Eastern Conference. In this evening’s Miami Heat vs. Philadelphia 76ers matchup, the Heat will have an opportunity to climb the conference rankings and come one step closer to usurping the Cleveland Cavaliers for the No. 3 spot in the East. Let’s take a look at what kind of turnout the evening’s sports parlay odds are predicting. 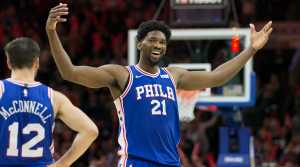 The Heat burn into this Friday night matchup flashing a 29-22 record that ranks them as the best team in the Southeast Division. At the same time, Miami is currently ranked as the 4th best team in the East, 7 ½ games behind the conference-leading Boston Celtics. Despite being several games behind the Celtics, the Heat is still very much in the playoff race. Considering the type of season they had last year, there’s no denying that Miami fans are thrilled about the team’s current success. However, since Miami is 2-3 in their last five matchups, the team will need a bit of a rebound to maintain their current ranking. Should online NBA betting players take them in this evening’s Miami Heat vs. Philadelphia 76ers contest?

All things considered, taking the Heat straight up doesn’t seem like that bad of an idea. Without a doubt, Philly is the better offensive team. But at the same time, Miami isn’t all that bad defensively. Not only that, it’s pretty clear that the 76ers are in the midst of a pretty severe slump. With that in mind, taking the upset line this evening could be quite lucrative for top sportsbook players.

The 76ers march into this Eastern Conference rivalry sporting a .500 record of 24 wins and 24 losses. Philly has made ‘trust the process’ their mantra, to help cover up for the string of losing seasons the franchise has undergone recently. The whole philosophy of trusting the process is based on the assumption that losing seasons will put the franchise in a better position to snag top-level talent. That’s all fine and dandy, but when are the wins going to roll around exactly? Philly already has Joel Embiid and Ben Simmons. Are they really waiting to pick up another superstar? Who do they think they are the Warriors? All jokes aside, Philadelphia should be able to deliver a better performance than 24-24. But considering that the 76ers enter this evening’s contest riding a 3-game losing streak, it’s safe to assume they won’t be playing better tonight.

Statistically speaking, it seems that the 76ers are the better team. At the current moment, Philly wields the 7th best scoring offense in the league and are snagging more rebounds per game than any other NBA team. Likewise, the 76ers are 3rd in the league in assists per game, which reflects the dynamism of this offense. That said, the Heat, who don’t match up that well offensively against the 76ers, might have the answer to deter the process’ offense. That would be the NBA’s 3rd best defense of course.